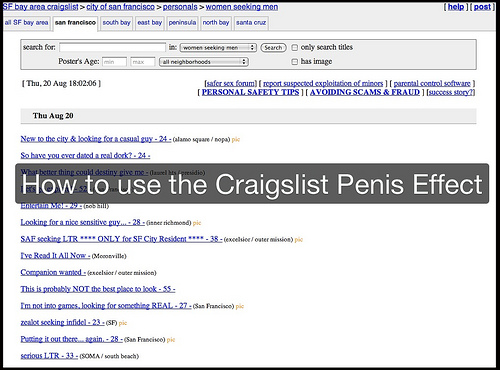 Every woman who has used Craigslist knows that it is a veritable jungle of unexpected penises. In other words, if you’ve ever posted a nice, g-rated “women seeking men” post, you will immediately and inexplicably have 50-80 pictures of men’s penises in your inbox.

After this happened to a number of my friends, I started thinking. Not just about how horrible men are at online dating, but how to use this to my advantage.

The Craigslist Penis Effect describes situations where everyone else is so horrible that, by being even half-decent, you can dominate everyone else and win.

These moron men on Craigslist would be better served writing 5 half-decent responses, testing to see which got the best response, and then sending it out instead of a picture of their generally mediocre manhood. I did exactly that for my friend on JDate and ended up getting very good at introducing girls to him. (Jewish women, beware of my Ashkenazi skills.)

Let’s take some examples where everyone else is so terrible that you can dominate by being even somewhat competent.

There are thousands of other examples: Writing winning scholarship applications that secure over $100,000 in funding. Or creating blog posts that drive hundreds of thousands of views. Or simply learning about the basics of social psychology for every day use.

The examples go back to my post about Big Wins, including why trying to save money on lattes is pointless for many people. As you can see, many Big Wins are actually easily within reach — if you choose the right targets and differentiate yourself from others. While you’ll have a few areas of life where you’ll have to go up against formidable competition, many other areas of life are wide open.

For those, don’t waste your time competing with lame Craigslist penis guys in a race to mediocrity. Instead, think about areas where your competition is mediocre (where everyone is doing the same thing, and doing it poorly) and carefully test multiple strategies to dominate. The Craigslist Penis Effect is a guide to standing out from others when being even half-competent can get you superb results. There are literally thousands of these opportunities.

Want to learn more about how to stand out and live a rich life?

Join my free email list to learn my secrets to earning more, learning, and finding your Dream Job

Join my free email list to learn my secrets to earning more, learning, and finding your Dream Job