Too many people say, "Oh, I'm not going to apply to Harvard. Even if I could get in, there's no way I could afford it." This is wrong. Read Anya Kamenetz's guest post about student loans, financial aid, and higher education to find out why, and to see her simple advice: "Apply to the most expensive schools you can." When it comes to student loans, financial aid, and higher education, everyone’s got an opinion. They just usually happen to be wrong.

When I was in high school, it drove me crazy to hear people saying things like, “Oh, I’m not going to apply to Harvard. Even if I could get in, there’s no way I could afford the tuition.”

This is wrong. In fact, if Harvard accepted them, these very people would likely have to pay nothing. But people don’t understand that. Like naive car buyers, they truly believe that “tuition” is what people actually pay, and are predictably too intimidated to even apply.

My friends who didn’t apply to these colleges are perfect examples of people who do the job of rejecting themselves before anyone else can reject them. It’s sad, because many of the people who think this way simply don’t know any better.

In reality, almost nobody pays the full sticker price.

Hundreds of thousands of dollars in scholarship money

Here’s my 10-second background so you know where I’m coming from: I grew up in a middle-class family with immigrant parents and 3 other siblings, got into Stanford (where I completed my undergraduate and graduate studies), and secured hundreds of thousands of dollars in scholarships.

But even if I hadn’t won a single scholarship, my financial aid would have required me to only pay single-digit thousands per year for a Stanford education.

That’s why it’s aggravating to read people, especially anonymous online commenters, who persist in advising students to apply to community colleges and state universities for financial reasons. That’s nonsense. If you want to go to your local university to stay close to your family, or you prefer a smaller school, fine. But don’t blame it on money. It’s just not true.

3 notes about applying to expensive schools

Harvard dean: “….Never allow a lack of financial resources to stand in the way of reaching for their first choice college…”

The curious aversion to student debt is at once irrational and understandable. To put it bluntly, I wouldn’t take on $40k of debt to attend Chico State. But I would easily pay $40k to attend a top-tier school like Stanford, Harvard, or Yale because of the education, caliber of peers, and opportunities available at schools like this.

Yet the constant drumbeat of “avoid student debt” produces some funny thinking.

Washington Post columnist Jay Mathews asked the provocative question, Do You Know a High-Achieving Student Kept From College Because of Money?. Not one person could provide an example.

As William R. Fitzsimmons, the Harvard dean of admissions and financial aid, writes, “Promising students should never allow a lack of financial resources to stand in the way of reaching for their first choice college.”

Always, always apply to the best schools you could possibly get into.

My take: Not always, and “better” is different for everyone. But can we stop being politically correct for a minute? Yes, expensive universities are often better than less expensive schools. At Stanford, I met people I could have never otherwise met. I had access to resources that few other colleges could equal, and experiences that few other colleges could provide. I learned an entirely different way of thinking.

That’s why I’m thrilled to run this guest post from Anya Kamenetz, who has simple advice: “Apply to the most expensive schools you can.”

To find out why, read on.

The average bachelor’s degree recipient graduates with $23,200 in student loan debt. But that is mostly preventable. Here’s one way to avoid it:

Apply to the most expensive schools you can.

Colleges are like airlines. The person in the seat next to you may be paying a fraction of what you are for the same ride. Too many people focus on the published sticker price, which makes public colleges seem more affordable.

The problem is that public colleges are broke. Broker than they’ve been in decades. They’re raising tuition and cutting back on their programs.

If you have good grades and test scores, and you have a special quality a college is looking for, you could end up with lower debt at a more expensive school.

Total grant aid to both undergraduate and graduate students increased from $43.4

billion) in 1998-99 to $61.0 billion in 2003-04 and $76.4 billion in 2008-09, in constant dollars. As you can see, institutional grants—money that comes from the college itself—is the largest source of grant money for college. Almost half of the new grant dollars over the past five years were from colleges and universities themselves. 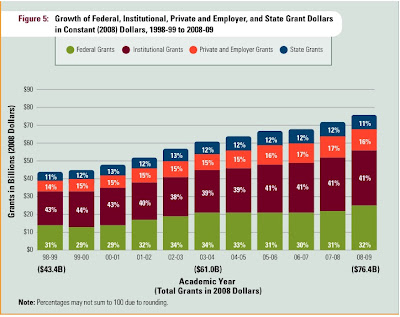 (image via the College Board)

A private college with a big endowment is likely to offer a more generous package of grants and discounts than a public university—in fact, the most expensive private colleges cover about 40% of the cost to attend for students whose families make $60,000 or less.

You don’t have to be poor to get financial aid, though. Quite the opposite. A 2006 study of major research universities found that they spent $171 million on aid to the poorest students—those whose families made less than $20,000 a year. At the same time, they spent $257 million on financial aid for the richest students, from families earning more than $100,000 a year. To look at it another way, between 1995 and 2003, grant aid from those same universities to students from families making $80,000 or more increased 533 percent, while grant aid to families making less than $40,000 increased only 120 percent. 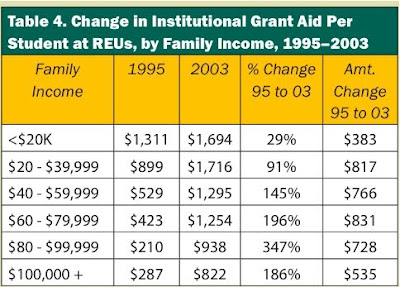 (Image via the Education Trust)

And then there was Middlebury. With the second highest tuition in the country, at $42,910, ranked far above SUNY and roughly equal to U Penn (#4 in the category of Tier 1 Liberal Arts Colleges.)

Here’s what she wrote me a few weeks after we met:

This is great! Middlebury said that I cannot take any more loans from them and every student is only allowed $4,000 in loans. I’m very happy too because today, I graduated a valedictorian!”

More than 30 of the most expensive private colleges, including Amherst and Claremont McKenna, have adopted no-loan policies over the last few years. That means if you get accepted and you meet their income requirements, they pledge to meet your needs with grants and work-study instead of student loans. Some colleges have had to pull back on the no-loan guarantee because they are taking severe hits to their endowments, but a richer college is still more likely to be able to work with you to limit your overall loan burden, just as Middlebury helped out Olabisi.

Here are some strategies for maximizing your financial aid package:

1) Fill out your FAFSA form as early as possible. You may be able to get help on this from a tax preparer such as H&R Block on an hourly basis.

2) Don’t apply early decision—it includes a commitment to attend if you are accepted, which means you can’t negotiate.

Now you’re ready to get a better deal.

“I want to let you know about some personal circumstances that have changed for me or may not be reflected on my application:

Good luck. The best financial aid packages go to those who are persistent.

Read Anya Kamenetz’s new book, DIY U, for more strategies on crafting a personal learning path that is affordable and relevant to your future.

Stocks and bonds: Everything you need to know — Updated for 2020