Case Study: How Jennifer tripled her rate (working 1/3 the hours) by mastering the art of networking

Most of us suck at networking.

We’re not sure what to say. 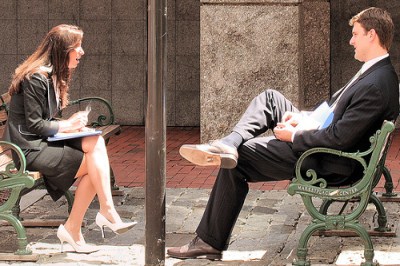 And even if we “believe” we should do it, we rarely do!

Sounds familiar…like working out, or managing your money, or even keeping in touch with friends and family.

Yet networking has produced the biggest jumps in my career by a huge margin.

Today, read about one of my students, Jennifer H., to see how she used strategic networking to triple her hourly rate — working ⅓ the hours — and generate a constant river of side income.

Fun tip: See if you can recognize any of your own psychological barriers in her story.

“I’m not being paid what I’m worth”

Jennifer is a psychology grad student who does product-design consulting on the side, applying psychological research to help companies better understand consumers.

She’d never had problems finding clients, but it was something that she often heard other design consultants complain about. What Jennifer did struggle with was getting paid what she was worth.

Looking back, she explains that she wasn’t convinced that she had anything unique to offer. After all, the research was publicly available and it wasn’t rocket science — companies just had to read it and apply it to their products.

Jennifer soon came up with a solution that would solve both problems: gaining confidence and finding clients.

Most people don’t know what they’re talking about

The problem with Jennifer’s line of work is that anyone can look like an expert — at least on the surface. When it comes to applying psychology principles to product design, anyone can read a basic psych book and throw out a few smart-sounding ideas.

Jennifer explained it in terms of the Craigslist Penis Effect, which basically says that most people are so mediocre that it’s not that hard to beat them if you’re even halfway decent.

Even if her competitors seemed convincing on the surface, most of them were really just putting in the smallest amount of effort required. Jennifer had to educate clients about the difference between someone who knew a few buzz words and a grad student who had been immersing herself in this stuff for years.

Being a psychology student, Jennifer understood herself well. She was a people person — when she needed help with something, she was more likely to call a friend than to look up the answer online.

She realized that she could turn some of her casual conversations into serious networking opportunities that would boost her confidence, help her prove herself, and set herself apart from everyone else.

How to turn casual chatting into strategic networking

Jennifer had always been the type to start random conversations with strangers. In college, she made it a habit of approaching people sitting alone and offering to have lunch with them.

In that sense, she’d been networking. She had a big group of acquaintances, but it wasn’t really productive career-wise.

Jennifer realized her mistake: she wasn’t keeping her goals in mind. There’s a big difference between simply chatting and chatting with a purpose.

She began to get tactical: How could she get people to talk about things that might help her with her career?

At this point in our conversation, Jennifer was careful to explain something: It might sound like she’s just using these people, but she doesn’t see it that way. She’s learned an important fact about people: they love to help you (as long as that help is structured and limited — more on that later).

Then, you can add, “By the way, I thought you should know I’m interested in working at your company. Do you have any advice?” She tries not to wait till the end to ask for their help. Instead, she tries to put the entire conversation in the context of her goal. She likes to introduce herself in a way that emphasizes the things she wants the other person to know about her. Then, when she returns to them later in the conversation they understand where she’s coming from.

Keeping your goals in mind doesn’t mean you spend the entire time asking them pointed questions to get ahead — it just means that you listen carefully; and, when the time is right, you can ask something that might help you.

You can do this anywhere, too — with anyone. “If you see someone standing there alone,” she suggests, “tell yourself that they’re just waiting for someone to come talk to them. You’re being the friendly person making them feel at home.”

It might be true and it might not be, but you have nothing to lose. It’s just as important to use psychology tricks on yourself.

The secret to being interesting

One of the biggest lessons she learned from Earn1K was to narrow down who you can be valuable to. Nobody can be popular with everybody, so you have to be selective and figure out what you can add to a certain person’s life. Without changing who you really are, you have to present yourself as the type of person that they will want to help and be around.

And that’s become one of her big secrets of networking success. She’s set up a system where she has coffee with someone new every week. She tries to find people for whom she can fill a professional or interpersonal need. She doesn’t try to trick them or try to act like a different person — she just tries to figure out what they might find interesting and get them talking about it.

She’s always ready, though, in case they want to talk about her. She makes sure to have a few short stories ready that they might like to hear. One trick she uses is to have a 30 second piece ready — after that, if they seem interested she continues; if not, she drops it.

Then, at the end of their coffee meeting, she asks who they would recommend she meet next.

How to maintain your network — the easy way

Some networking guides insist that you have to email contacts once a month to keep yourself on their minds. Jennifer thinks that’s too much work.

Instead, she tries to carefully manage her public presence. She wants to keep herself “constantly and passively interesting.” She has a private Twitter feed, granting access to people only once she’s met them for coffee. It makes them feel cool, like they’re part of a special club.

She also uses Facebook and other online tools to reach a lot of people at once. She posts interesting links that she comes across, and tries to be an excellent “passive resource” for people. Then, she sometimes turns into an “active resource” when they need help with something. She also reaches out to specific people if something reminds her of them or she wants a specific piece of advice.

That way, it doesn’t feel forced, and it’s a lot less work to maintain her connections.

The real benefit of networking: clients and confidence

“Self-promotion is especially important for women,” she says. “It’s a well-known finding in the psychology world that people think less of work that they know was done by a woman. Same thing with resumes — given two identical resumes with different names, the man is more likely to be hired.”

“Because of this,” she explains, “it’s doubly important for me to get out there and hustle.” She can’t afford to just sit back and wait to be noticed. If she wants people to care about her, she has to take an active role and make them care. She has to find that quality that makes her different and unique and show it off.

So what’s the real value of networking? As Jennifer sees it, the biggest benefit is in having “weak ties” into other people’s lives. Nothing might come of it right away, but it just gives you more options.

She gets 100% of her freelancing business from her network. If you asked her how to find clients without it, she would have no idea. And yet she finds herself with a constant stream of projects. If she needs something new to work on, she simply gives someone in her network a call.

The other benefit to all this is that it’s boosted her confidence. Remember the Craigslist Penis Effect? It’s a lot easier for her to convince potential clients that she’s special now that she has a network of people willing to give her introductions and recommendations. And even indirectly, it’s pretty much impossible to not get more confident after you’ve practiced having coffee with strangers enough times.

And remember how she was worried about not having anything unique to offer since the research is publicly available? With her newfound confidence, she learned to sell herself as an expert. Sure, the research reports might be available to anyone, but very few companies actually go out there and find the parts relevant to their products.

Plus, not only can she help them apply the most relevant research to their unique situation, but she can do it in a lot less time than it would take them.

The right way to ask for help

Jennifer used to be the one trying to build up the confidence to ask strangers out to coffee. Nowadays, she’s such a master networker that she has a backlog of people who want to buy her coffee to get her advice.

Her best tip? If want to ask someone for help, make sure that:

She once got an email from some guy asking what she thought he should write his dissertation about. Seriously.

If you actually want a reply, try something more like, “I’m working on X specific thing. What are the first three books I should read?”

Remember: People are much more likely to help you if you make it easy for them. Don’t ask too much, and make it clear that you’re not going to keep bugging them forever.

Jennifer realized that she couldn’t be all things to all people so she stopped trying. Instead, she targeted the most important people and became strategic about her time.

Thanks to convincing clients that she’s worth it and learning to value herself, she’s been able to triple her rate. Plus, by working smarter and choosing the right projects, she only spends a third of the time that she used to.

She used to think that no one cared what she had to say. Now, she understands that she has experience and expertise, and that a lot of companies will pay well for her insights.